The expanding role of LED lighting and its challenges

The range of applications of LED lighting continues to expand, with its excellent light adaptation, nearly no irradiation of infrared or ultraviolet radiation, and ecological characteristics such as long life and low power consumption. LED lighting emits intense light from light emitting diodes, as opposed to the conventional lighting typified by incandescent bulbs or fluorescent lamps, which emit light equally in all directions-360 degrees. Highly directional lighting equipment such as ceiling-mounted light fixtures allows you to implement structures that make the most of the light, whereas the difficulty of emitting light that is diffused evenly is regarded as a weak point of such lighting devices. When you can freely direct light with highly directional LED lighting, you can also diffuse the light in all directions, as a matter of course, which should lead to new applications of LED lighting. Minebea has launched the development of a lens for lighting that will be capable of skillfully controlling light.

The lens that will be vital for LED lighting

By using a special lens to collect and diffuse the light generated by light emitting diodes, the mechanism of this LED lighting spreads the light efficiently to brighten the entire space. The lens of the LED lighting plays a vital role in affecting the quality of the lighting itself. Up to now, a thick lens known as a cup-shaped lens was commonly used as the part of the lens needed for the complex operations of the light. Although the cup-shaped lens was excellent for adjusting the angle of the light, the light tended to be attenuated in the lens, resulting in a loss of the light generated by the light emitting diode. Although Minebea

actually manufactured a collimating lens drawing on its optical simulation technologies, there was still room for improvement with respect to the attenuation of light. The light transmittance of the lens is also directly connected with the power consumption of the LED lighting. Can’t we further reduce the loss of light, and can’t we collect and diffuse light more efficiently? Minebea has ultimately achieved one of the solutions toward realizing the lens of the future by drawing on its specialty light guiding panel technologies to make a thinner lens.

Both collecting and diffusing light in a 1mm lens

By arranging several optical lenses to carve a fine prism pattern, Minebea has developed a lens for LED lighting, having the thickness of only 1mm, which can skillfully control light.

A thickness of 1mm has been achieved by carving an ultra-fine prism pattern on a thin plate. 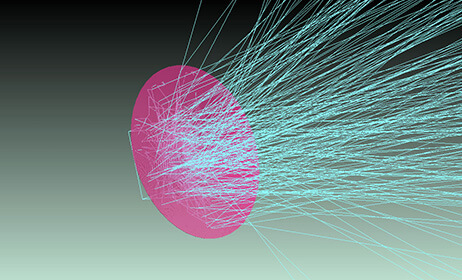 At a glance, the 1mm lens may appear to be a single plate, but the two sides of the front and back have entirely different machining applied, as they perform collection and diffusion of the light, respectively. The light collection surface is formed with optical elements that mix light in order to suppress uneven illumination in the light generated from the light emitting diode and the uneven color known as yellow ring. The diffusion surface combines two lenses with different optical properties in order to achieve uniform diffusion of the light. A Total Internal Reflection (TIR) fine prism is used as a base to achieve uniform diffusion of light in the lens, and a 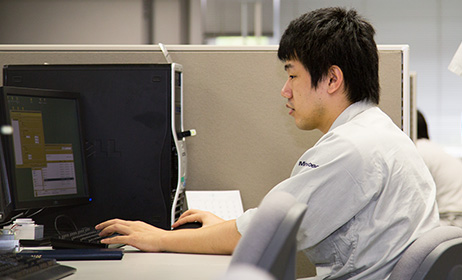 Fresnel lens is used to perform fine adjustments in the center of the lens, which requires precise guiding control. In addition, carefully mixing the light in the lens allows you to consistently generate “high quality” light irrespective of the quality or quantity of the light emitting diodes. With respect to the lens development required for lighting applications, we have also achieved rapid development of lenses with a variety of optical characteristics, through the application of the most suitable optical designs developed by thorough optical simulation. 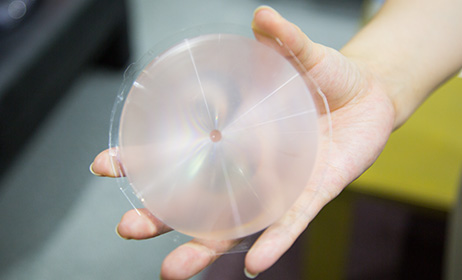 Fusion of Fresnel lens and TIR lens on a plate 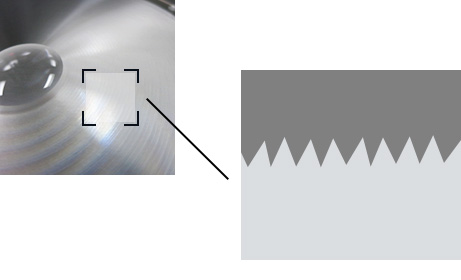 Carving of an ultra-fine prism pattern

The future of LED lighting changed by the thin lens

While LED lighting effectively saves around 60% of the energy compared to conventional light bulbs and fluorescent lamps, using this thin lens achieves an additional energy savings of about 30%. By adjusting the optical pattern of the lens, you can skillfully control the direction of the light, allowing for various combinations of light distribution and diffusion.

If you use a thin lens in a street light that serves to illuminate the road, for example, you can control the direction of the light so that it illuminates only the road brightly. In addition to improving visibility on the road, it solves the problem of uselessly illuminating the surrounding buildings and the like as well.

Features include not only directivity of the light, but also further enhanced diffusivity. By introducing a thin lens in illuminating the room, for example, you can create a soft light and in turn, a comfortable space. In fact, leading U.S. lighting equipment manufacturers are beginning to incorporate Minebea’s thin lens in lighting equipment focusing on design and using the unprecedented thinness and performance in a variety of fields. 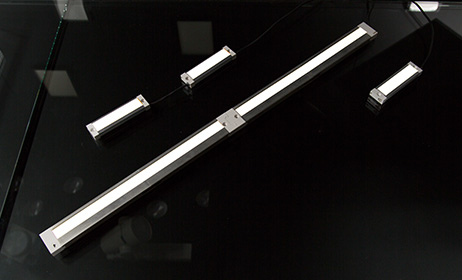 Prototype lights in the Mita Showroom